100th Anniversary of the First Air Crossing of the South Atlantic

On the 3rd of April, celebrations took place for the first air crossing of the South Atlantic, led by Sacadura Cabral and Gago Coutinho. It was a memorable show! 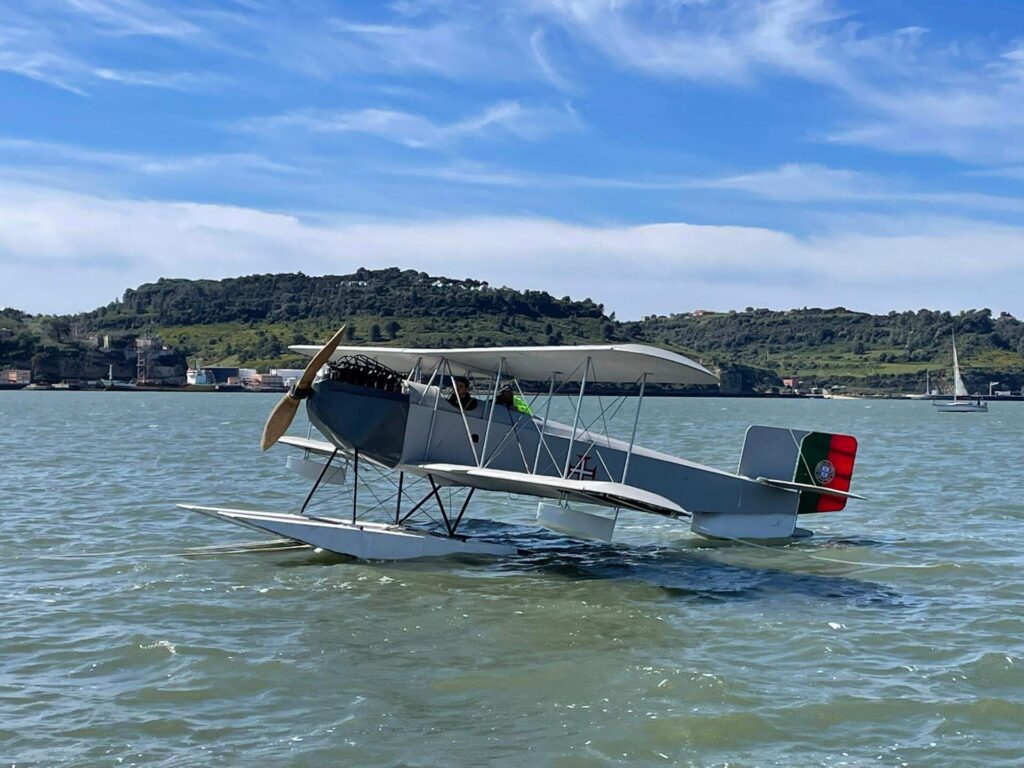 Another show on the Tagus!

On the 3rd of April, celebrations took place for the first air crossing of the South Atlantic, led by Sacadura Cabral and Gago Coutinho.

It was a military ceremony and naval air parade, organized by the Portuguese Navy and the Air Force, and was presided over by the President of the Republic, Marcelo Rebelo de Sousa.

The banks of the Tagus River were full of people who attended this remarkable event, which was also treated to an overflight of Portuguese Air Force planes and helicopters

In the water, a fleet of over 100 vessels – private, business and public – joined this moment, providing an unparalleled spectacle.

The incredible story of the first air crossing

The first air crossing of the South Atlantic began on March 30, 1922, in the context of the commemorations of the First Centenary of the Independence of Brazil. It was carried out in a single-engine seaplane, equipped with a Rolls-Royce engine and specially designed for the trip. He was baptized as Lusitânia.

The first leg of the trip was completed, on the same day, without incidents in Las Palmas, in the Canary Islands, although excessive consumption of fuel was noted.

On April 5th, they left for the Island of São Vicente, in the Archipelago of Cape Verde, traveling 850 miles. There they stayed until April 17 for repairs to the seaplane – which was putting water in the floats – having departed from the port of Praia, on Santiago Island, heading to the Archipelago of São Pedro and São Paulo, in Brazilian waters, where they moored, without the aid of the wind, on the 18th. As the sea was rough, it caused damage to the Lusitânia, which lost one of the floats. The aeronauts were collected by a Cruiser from the Portuguese Navy, who took them to Fernando de Noronha. Despite being exhausted by the 1700-kilometer flight and the bumpy landing, they celebrated the discovery, with precision, of those rocks in the middle of the South Atlantic, using only the astronomical navigation method created by Gago Coutinho.

With Portuguese and Brazilian public opinion involved in the feat, the Portuguese Government sent another seaplane, baptized as Pátria, from Fernando de Noronha, by the Brazilian ship Bagé, which arrived on May 6. The seaplane was landed, assembled and overhauled on 11 May and they took off from Fernando de Noronha. However, a new accident affected the aeronauts, when, having returned and flying over the São Pedro and São Paulo archipelago to restart the interrupted section, an engine failure forced them to land emergency, having remained shipwrecked for nine hours, until they were rescued. by an English freighter that was in transit in that region.

Returned to Fernando de Noronha, they waited until June 5, when they were sent a new seaplane, baptized as Santa Cruz. Transported by a ship from Portugal, it was placed in the water of the Archipelago of São Pedro and São Paulo. It was there that he took off to Recife, making stops in Salvador, Porto Seguro, Vitória and from there to Rio de Janeiro, then the Federal Capital, where, on June 17, 1922 he docked in front of Ilha das Enxadas, in the waters of the bay from Guanabara.

Enthusiastically hailed as heroes in all the Brazilian cities where they landed, the aeronauts had successfully completed the first crossing of the South Atlantic. For the first time in the History of Aviation, they had traveled over the Atlantic Ocean only with the aid of navigation astronomy from the airplane.

One last curiosity. Although the trip took seventy-nine days, the flight time was only sixty-two hours and twenty-six minutes, covering a total of 8383 kilometers.

Now you know a little more about one of the achievements of the Portuguese Discoverers. If you also want to “give wings to your imagination” and want to organize an event tailored to you, please contact us. See you soon!